I love cheese. There is nothing as good in the world as potatoes covered in parsley, butter and cheese. And as of last week I can make all of the above happen in the space of my backyard. Life does not get much better than that. Had I known how easy it was to make cream cheese from raw milk it is likely that I never would have bothered to do anything else with it so perhaps it is for the best that this discovery took until now to make. 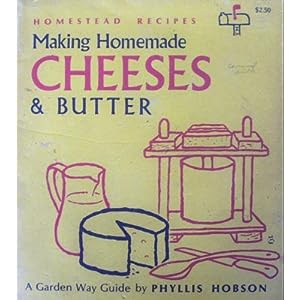 Much of the homestead reading I do is from books that are 40+ years old. It isn’t that I have a dislike for modern literature it’s just that pretty much all of our really good knowledge was acquired back when people were actually doing this stuff which means the pre-grocery store era. One such book is a tiny little thing called Making Homemade Cheeses & Butter by Phyllis Hobson published by A Garden Way Guide in 1973. In it were some of the simplest cheese recipes I found anywhere and it cost about 50 cents. Funny how some things never change hey… that was the cover price. I digress….

I left a gallon of raw milk on the counter for three days. I know a crime right? Wrong. The result was that the milk separated into three layers, four if you count the moldy skin I peeled off. The top layer was a rich thick cream, then a slightly thicker ‘soured’ milk and the bottom contained the whey. I placed a cheese cloth into a giant bowl and then poured the contents of my gallon jar into the bowl. I then strung up the cheese cloth to let it drain over night. In the morning I dipped my finger into some of the tastiest cream cheese I have ever eaten. Final step in my cheese making process was to stir in some Pesto Garlic Spice Blend from my amazing friends at Made with Love. And viola! Who needs Philly when you have Patty? Haha. Next week I am making chocolate cream cheese with Aztec Chocolate Spice Blend.